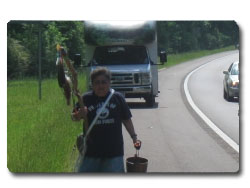 Three Native American women are walking across Mississippi on their way to Lake Superior. MPB’s Jeffrey Hess reports that they are carrying a bucket of water from the Gulf of Mexico to Wisconsin to raise awareness about clean water.

On a busy stretch of highway 49 near Mendenhall, three women carry a small copper bucket and an Eagle Feather Staff.
69-year old Josephine Mandamin says they are on what is called a water walk, carrying asmall bucket of Gulf of Mexico water they collected in Gulfport to Lake Superior.
“We are one of the four that are carrying the salt water from each of the four directions.
To raise consciousness, to collect the consciousness of the people and for people to be aware
that the water is very precious. And the salt water is what we are carrying now,” Mandamin
said.
There have been 8 different water walks since 2003. The women raise some money before the water walk, and then rely on good natured strangers for any help along the way. 59-year old Sharon Day says she chose to walk from the Gulf because the Mississippi River has special meaning.
image: Sharon Day carries the bucket and eagle feathers.