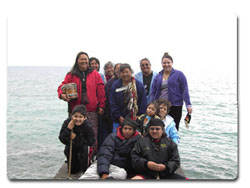 Carol Hopkins: We just finished the send off ceremony, led by the chief little boy + onabinisay – and it was nothing short of absolutely awesome – the spirit is full of love and there is much excitement with everyone involved. Josephine is off to fill her copper pail with water from lake ontario and then begin the walk. Hilda and family, violet melvina, angel rodney, bea, charmain, pauline + luanna, and others are with josephine. Gram, nancy, nick, mary, beendigay + daintry, krystal, shkawbaywis + dawnestelle, jess + gabe, brian hill, mark, dave, val, myself, and all the kids are on our way right now to whirlpool park for tobacco offerings and will finish the day at the rainbow falls – u.s. side of the falls. Meegwetch nozhem

We walked with 4 women from the Seneca Nation today. As we walked earlier today we saw a beautifil panumbra around geezis – many awesome colors. We also encounter the incredible smell of sweetgrass a couple of times as we walked as well. We finished our walk with them at the Seneca Nation beach. It was really hot this afternoon – about 29 celcius and we were so thankful to cool off for a bit in the water. Some other women joined us at the beach who arrived by kayak with some food.

As we continued our day we tobaccoed many many rivers and streams from the Seneca Nation to Fort Erie. We are still on our way to Fort Erie.

Yesterday was pretty incredible too – after the send off we went to the whirlpool near the Falls and offered tobacco and song and then we walked to the Rainbow Falls (USA side of the falls) and then finished by walking around Goat Island. As we offered our tobacco over there a rainbow came to the very point where we were standing.

The spirit is kind and loving – its all been great. Nozhem

Laura Liberty: I returned yesterday evening from walking with the Lake Ontario water walkers. After the send off Josephine and supporters drove to a small picturesque park where she managed to dip her copper vessel and gather some water. Luckily she didn’t fall in! Violet started things off along the lake shore, then Angel , myself, Beatrice, Charmaine, Hilda, Lucy, Melvina, Josephine , and Melvina each took a turn singing water songs as we walked. Forgive me for forgetting the names of the young men but Hilda’s son, and Melvina’s son BJ, Violets’ son, Adam among others were eager to take turns carrying the Eagle Staff. All of the streams and rivers we passed received our prayers and tobacco. After retiring the staff and water in St. Catharines local supporters Jackie and her partner who live in St. Catherines brought a big pot of corn soup, and a pot of ham soup made by a local chef named Ted Ceasar. He operates his own restaurant “The Beantree” and there fore was unable to join us on the trail. The soup was fabulous and it disappeared quickly. With full bellies everyone retired for the night. It was a beautiful day!

I joined in the next day after working in nearby St. Catharines. The water walkers had arrived in Grimsby and were making their way to Wynona when I caught up with them. The water sure moves! Once again we were treated to a big pot of ghoulash delivered by Jackie and her partner, cooked by Ted. It was delicious! this lunch break took place in a park in Hamilton. Josephine was interviewed by the local TV station with Lake Ontario in the background. The walkers arrived in Burlington when I had to leave them at around 4:00 pm. Only the second day into the journey and the water was moving forward as it should be!!